According to Covington Jr., William Cecil was determined to “make a go at seeing that his inheritance was in good shape when it left his hands for the next generation, regardless of  what he was told of the impossible nature of his task."

“We have a river. We have a chateau. We have the land. We have no vineyard.
Every French chateau has a vineyard.” – William A.V. Cecil (www.biltmore.com)

The Inn on Baltimore 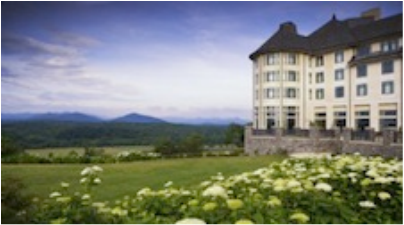 Inn on Biltmore Estate opens in 2001. http://www.biltmore.com/visit/biltmore-house-gardens/estate-history
George Vanderbilt always planned to build a lodge on the estate to accommodate additional guests.  In 1900 George gathered estimates for his lodge that included 43,000 feet of flooring, 449 doors and windows,
188,000 shingles all at the cost of $18,000. Considering the constant investment needed for the ever-growing Biltmore Estate, George decided to put the idea on the side for a while. George and his guests would have
to make do with Biltmore House and its 250 rooms, with 34 bedrooms and 43 bathrooms. (http://theblueridgehighlander.com)
George's descendants, the Cecil’s decided to fulfill his plans to build the Inn on Biltmore Estate.  The Inn, which was built in 2001, was done in a style and architectural design to complement that of the Biltmore House and has achieved a Four Star, Five Diamond status.

The Farm in the Antler Village

Antler Hill Village was once the social and work center of those who worked and lived at the Estate since the 1890’s. It has been restored in a manner that reflects all the trades and the activities that served and serviced the Estate all these decades. Complete with blacksmiths, woodworkers and other crafts. It now serves as a live example of history that made Biltmore possible. (http://www.biltmore.com)