Jan Aerston Van Der bilt
The Vanderbilt family in the United States begins with Jan Aerston Van Der bilt who was a Dutch farmer born in De Bilt, Utrecht, Province, Netherland (Holland) and died February 2, 1705 in Bergen, New Jersey. (www.geni.com).
He came to pursue agriculture.
He was the great-great-great grandfather of Cornelius “Commodore” Vanderbilt.
And it is Cornelius “Commodore” Vanderbilt who built the first Vanderbilt’s wealth. 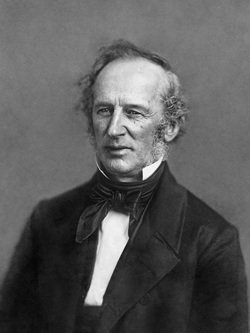 Cornelius Vanderbilt was born May 27, 1794 on Staten Island, NY. He was the second son of Cornelius and Phoebe Vanderbilt and “he asked to borrow from his mother $100 for the purchase of a small sailing vessel, with which he hoped to start a small ferry business. He was operating three ferries at the end of his first year of enterprise. The Vanderbilt fortune had begun” (Biltmore Estate, pg 3)
Cornelius was 19 when he married Sophia Johnson Vanderbilt (his first cousin) and they were married for 53 years. They had 12 children. “By this time the press had already called him the ‘Commodore’ because of his strong will and determination, qualities which led to success in commercial endeavors.” (Biltmore Estate, pg 3)
He was successful commercially, but with his family he did not seem to have a good reputation. He decide to move to Manhattan from Staten Island and informed his wife of the move. Sophia was simpler and preferred to stay in Staten Island. The Commodore committed Sophia in an asylum until she finally decided to move to Manhattan! He was verbally cruel with is children, very demeaning to his son William Henry.
Cornelius had to testify before a state railway commission he said "I stated a while ago that I for one will never go to a court of law when I have the power in my own hands to see myself right. Let the other parties go to law if they will , but by ***(deleted expletive), I think I know what the law is; I have had enough of it."And indeed he had, from his earliest days as an uneducated lad, piloting his own boat in the New York waterfront, where a ramming prow and a ready fist were better than any lawyer, to his later career in the mart of unregulated  business where inspectors, judges, and legislators were frankly for sale. Vanderbilt had the reputation for a kind of integrity: in deals over competition and the refraining  therefrom  he would stay bought. And he was loyal to his own."(Auchincloss, pg 18) 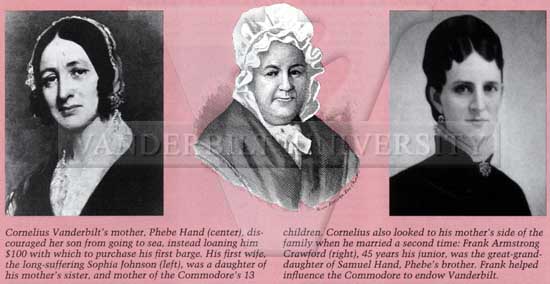 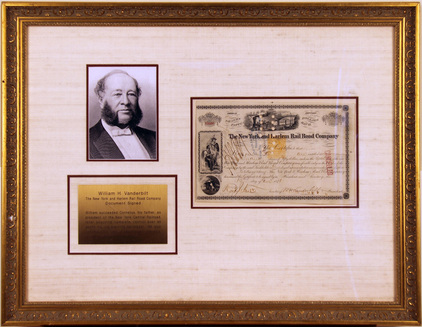 William Henry Vanderbilt
(May 8, 1821 - December 8, 1885)
William was not his father’s favorite and he was treated poorly by Cornelius Vanderbilt. Every were you read it tells you how Cornelius would treat William with disdain, even letting William train with Cornelius worst enemy and best friend Mr. Daniel Drew. Mr. Drew was a conniver, uneducated, but Cornelius new the man that could deal with Drew can deal with anybody. This proofed true of William having been trained with Mr. Drew. William was 18 years old when he trained with Drew. (Biltmore Estate, pg 4)  ” So well did the two get on that Drew named his last-born child William. The younger Vanderbilt seemed to have a genius for accommodation. Yet there is something distasteful in the picture of this homely, stout, phlegmatic man, with his small pig eyes and long, flowing side whiskers, bearing without a murmur the insults of his irascible sire and ending with the whole fortune in his pocket. It was even said that he procured his young cousin, Frank Crawford, to be his father’s second wife, figuring that she might contain the old man’s lust and be satisfied with a more reasonable settlement than the commodore’s less respectable women friends. And if this was so, this was quite right, for Frank took excellent  care of her difficult  spouse  and was apparently content with her niggardly  half million. Yet if some saw William as shamelessly conniving and manipulative, it is none the less true that he did a great deal for his father.  He was an effective steward of the railroads, and in the eight years that he survived the commodore he doubled the fortune.” (Auchincloss, pg.28) 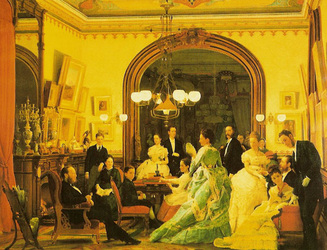 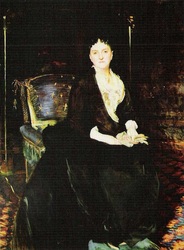 William Henry Vanderbilt         The William H. Vanderbilt Family at home         John Singer Sargent's
(oil on canvas, 1873)                         Mrs William Henry Vanderbilt
(Maria Louisa Kissam)
A frail and seemingly unambitious youth, William was dismissed by his strong and dynamic father as incompetent to run the family business. The two split on William’s decision to marry at age 19, and Cornelius sent his son off to farm on Staten Island. To his father’s surprise, William made the farm a profitable operation. 'The lives of Cornelius 'Commodore' and William Henry Vanderbilt are a fascinating slice of American history.  In a land of opportunity, they became a royal family.   Wealth, power and influence led then into the world of the socially elite.  A world that often made it difficult on the newly wealthy.  The Vanderbilt's proved that new American fortunes overrode the order of old society bloodlines.
(Theblueridgehighlander.com)
William at 19  married Maria Kissam and had nine children – five sons and four daughters. One of his sons was George Vanderbilt.                      George Washington Vanderbilt built the Biltmore Estate. 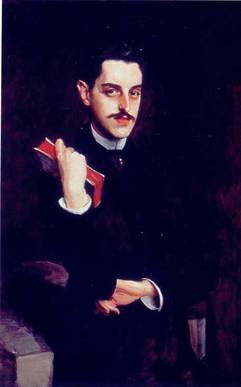