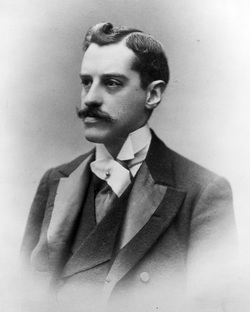 George Washington Vanderbilt was born in 1862 and grew up with tutors and a well-rounded education. He was one of eight children in his family. Because of family money, he was able to travel to different parts of the United States and Europe and experience historic sites, museums, and theaters . He was known for his love of travel and different cultures. Vanderbilt even knew eight different languages. This young appreciation for the arts developed further as he grew older. At the age of sixteen, he attended the Columbia University and graduated with high honors.(The Biltmore estate)
George Washington Vanderbilt was the youngest in the Vanderbilt family when the mansion at 640 Fifth Avenue was completed in 1881.  It was considered the largest and most splendid house in Manhattan. Here, George was exposed to the latest modern conveniences, refrigeration and telephones as well as a glass-roofed stable courtyard to exercise William Henry’s beloved trotting horses.  The Manhattan mansion was decorated in European style, accenting the architectural design of the mansion.
Growing up as a child, George was quiet and intelligent, he showed little interest in the families financial business. George was drawn to his father’s cultural interest. He began displaying this interest at an early age, by creating his own collection of books and artworks including overseeing the designs of his private quarters and personal library at their Manhattan mansion. George knew the quality of the “finer things.”  He enjoyed reading books, traveling the world, and a study of the arts. George experienced the development of the famed Fifth Avenue mansion and was a natural when it came to overseeing and housing a collection of fine arts.  Eventually he would inherit the mansion and all its contents.With his inheritance from William Henry’s fortune, George took to an even greater height, the qualities the Vanderbilt displayed in regards to their personal American aristocracy. It was in his nature to be a perfectionist, a nature that would manifest his dream of a self-sufficient country estate that would rival none other (Vanderbilt family history)
George visited Ashville, NC as a child with his mother. He fell in love with the surroundings. He decided he was going to build a house where his mother could go to enjoy the wonderful air in Ashville, where he could go to enjoy and recuperate from his maladies and a family home. I must say then, when you are in Biltmore and are detached from the tourist, you can feel comfortable in the rooms. I believe George Vanderbilt's vision of a family home did become reality.
He helped the economy of Ashville  by hiring the people of the town to build his house. George wanted to create a self sufficient home. This did not happen until his grandson took over.
George met a woman when he was in his thirties. She was about eleven years younger than him. They married in Paris. The new Vanderbilt was Edith Stuyvesant Dresser.
Edith Stuyvesant Vanderbilt
January 17, 1873 - December 21, 1958 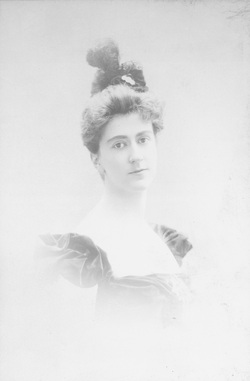